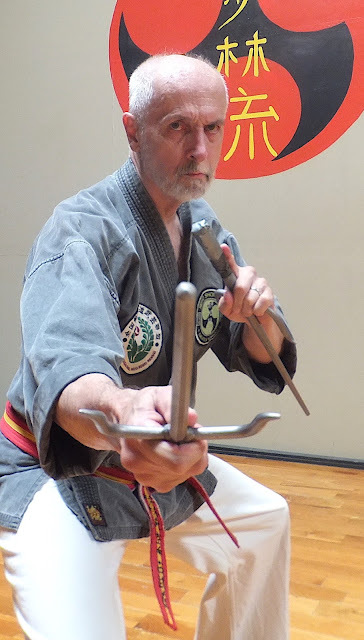 The sai, a common kobudo tool used in most Okinawa Shorin-Ryu karate dojo, is a close-combat weapon. Although in can be thrown to assist in social distancing. The art of sai is known as sai-jutsu, and considered a branch of Shorin-Ryu karate and kobudo. Sai are held by grips or handles (tsuka) in order to extend the reach of the weapon to enable a defender to thrust the point (saki). But, it is also commonly held in reverse grip for blocking, punching, hooking and trapping. The saki (point) is dull for training in dojo: in actual combat, it is sharpened.
Kobudo practitioners often carried additional sai in a belt (obi) for throwing, and indeed, some sai kata (forms) emphasize technique (waza) for throwing sai. When, training in a dojo, a thick target board is sometimes placed on the dojo floor to practice throwing technique. If one trains outside, the ground is used as a target. Likewise, a human-shaped target can be placed nearby for throwing sai at a torso.
The distinct, 3-pronged trident, is designed with a pointed shaft surrounded by two curved prongs (yoku) for blocking and hooking. The source of the metal to manufacture such tools did not exist on Okinawa, and likely sai were imported from China. In the historical past of Okinawa, there was no known iron resources on the Okinawa islands, and today, there is only one known forger on the tiny islands.
The Ryukyu Islands have a long history without mining, and the small island chain lacks metallic resources other than a couple of tiny historical copper and antimony mines. Even so, there are metallic resources on the adjacent seabed associated with Okinawa. Such resources; however, were out-of-reach of past technology and were only discovered as late as 1977. These sea floor deposits are volcanogenic massive sulfides found near black and white smokers (hot spring vents), similar to the now, high-and-dry, Ferris-Haggarty (Wyoming) and United Verde (Arizona) massive sulfides deposited in similar marine environments in the earth's geological past.
Even so, a true sword of Okinawa existed! This is known as shinken, and is in reference to the intensity of Okinawa budo: basically to practice Okinawa budo, one must use serious effort (Durbin, undated). Few are as serious about training as Okinawa karate masters.
So, where did the sai come from?. According to some writers, the sai may have been broken from tridents made in China. Apparently, Okinawans liked smaller tools for self-defense and may have traded for tridents and then removed the three-pronged blades from the shaft (bo) for sai.
Thus, the sai may have originally have been used by Okinawa farmers like a pitchfork or a seed-furrowing tool. Another very likely source was a Okinawa fisherman harpoon-like tool known as nuntei-bo. Although iron was smelted on mainland Japan, it is unknown is iron was smelted on Okinawa, it is likely the weapon was imported from China by a member of the Okinawan royal family or bodyguard. It is also possible that the sai originated by breaking the trident off nuntei-bo.
The sai, like many Okinawa kobudo tools, has different kata (forms) as well as bunkai (self-defense applications).  When you investigate classes at your local Okinawa karate dojo, be sure to find out if your future sensei (teacher) is certified to teach sai, and find out if they charge additional fees to learn kobudo. Many do charge extra.

"In Kobudo, to defend with sai, one becomes sai" In Arizona, both mudansha and yudansha (lower rank belts and black belts... 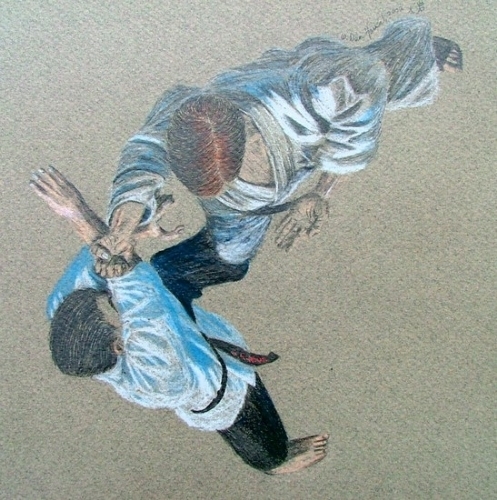